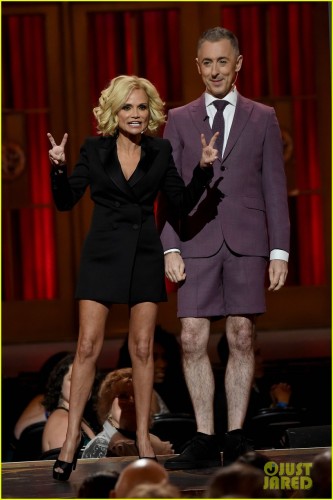 If you were able to catch the opening of the 2015 Tony Awards, you saw first hand how well Kristen Chenoweth and Alan Cummings were as hosts of the Opening ceremony this year.  The chemistry between them were excellent and their routines were spot on.  I love the monologue and the sing and dance routines.  The costumes had you laughing.  Kristen looked stunning in her shorts and Alan Cummings made you laugh seeing him in shorts with his very white legs.  I wanted to shout at the tv, Alan put your pants on… Nevertheless, they were great together.

I could not get over Alan’s great singing voice.  He really is talented. Of course we all know how multi talented Kristen Chenoweth is and can’t help but love her in everything that she does.  I am so happy that she fully recovered from that mishap a few years ago.  You really have to believe in miracles after seeing her stellar performance on stage tonight.

The costumes of the routines were just fabulous. Two thumbs up to the costume designer and the make-up crew. The stars looked great. We can’t leave out the fabulous stage sets that we viewed tonight. The design crew was superb and the stage hands did an excellent job in making sure that everything went on without a hitch.

I am so happy that they televise the Tony Awards and love how well they make them so interesting. Way to go CBS for doing such a fabulous job with televising the 2015 Tony Awards. I am impressed that each year it just keeps getting better. I do think that this is my favorite year ever for watching the Tony Awards.  Congratulations to everyone involved in the production and the designs.

It would be remiss of me not to give a warm shout out and thank you to the Just Jared Team for having the best photos of the event. After watching the show I had to search for the best pictures and of course the Just Jared team had the most real and fun pictures capturing the essence of the event.  I love you guys at JustJared.com… Thanks for doing what you do so well… You really give the other guys a run for their money… Let’s just say, they shall remain nameless, but we all know who they are that pull in the hundreds of millions.. Not that you guys don’t rake in the bucks, but you know what I mean… Thanks again for all the great coverage that you share with the readers. You have a fabulous team…