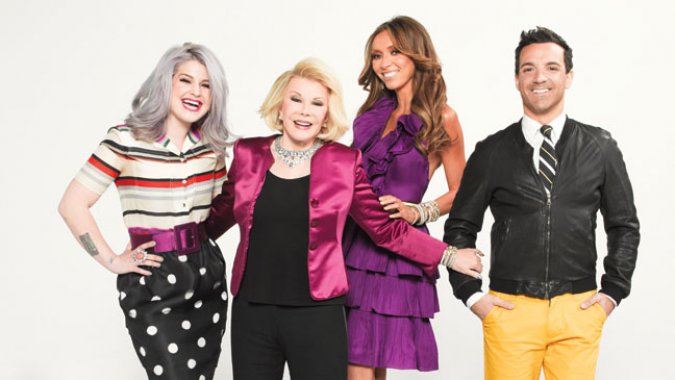 First and foremost: There will always only be one Joan Rivers!!! Absolutely no one can replace her or get away with what Joan Rivers could say. Joan Rivers was unique and special and the Fashion Police will never be the same without her. We miss you Joan Rivers!!!

According to E! Fashion Police will be off the air for awhile. In a recent statement, the network stated:

“E!’s comedy series Fashion Police is going on hiatus and will return in September,” the network said in a statement. “We look forward to taking this opportunity to refresh the show before the next awards season.”

Personally, I hope they bring back a new show with a different twist and angle.  The Fashion Police can’t exist without Joan Rivers because she was really that special.  Can they have a new fashion show that is “entirely new” yes!! But they really have to put on their thinking caps and try to be creative.  This unfortunately means to clean house entirely!! The remaining two cast members Our talented co-hosts Giuliana Rancic and Brad Goreski, should not be recast in the new show… Primary reason they just do not work well without Joan Rivers, and given the recent fiasco about the comment that sparked all the controversy about the Disney star, Zendaya, I think this is the only right move to take. Regardless if this was done with malice or jest, it has tarnished the image of the show.

One thing that has been troubling me for awhile is that I think that Giuliana Rancic’s body is scarily too thin. I have always admired her, but she has gotten much too skinny over the past year. I do not buy the kine that she is just naturally skinny… She has progressively gotten skinnier and it is an unhealthy look for someone with such a prominent role in fashion. I think that her loved ones should stage an intervention for her and make her face the harsh reality that she is too thin.  Especially since she has small children that I am sure she wants to see grow up, she should get help and treatment.

I can never forget one of my all time favorite artists, Karen Carpenter that died in a complication related to an eating disorder. Everyone at the time just said that she was skinny.  The skinnier shoe got was just a cry for help. It was too late when they tried to get help.  If we want to be real and talk about a major fiasco that can be avoided, I think that more people would be speaking out about this issue, since it is right in front of us.  I say this with a heavy heart because it has been on my mind. It would be a tragedy that could definitely avoided if people act and do something now, like start the discussion that this person that has such a prominent role in the fashion industry is dangerously too thin and appears to have an eating disorder.

I am no doctor and could be wrong about Giuliana Rancic, but I would never forgive myself for not sharing my deepest concerns about her health and overly thin frame. It just does not appear to be healthy and should be addressed given her prominent role to millions of young girls that look up to her. I believe that Giuliana Rancic has great qualities, despite having used poor judgement in the statement regarding Zendaya.  I want to see her stay around in the industry, I have always enjoyed her shows and segments on E! with her husband and other lifestyle segments.  Giuliana Rancic will not be around, if she suffers from an eating disorder and does not get help.  I hope that I am wrong, but if I am not, I sincerely hope that her close friends and loved ones stage an intervention to help her before it is too late.

…. the style shaming framework of the show was inescapably offensive to women. Because of segments like these:

1) “Starlet or Streetwalker,” the unpopular philosophical question — is this woman dressed well or like a woman people pay for sex?

2) Bitch Stole My Look-your classic who wore it best, but edgier because “bitch.”

3) Rack Report-match the breasts to the celebrity. The DNA of the show was the opposite of timely.

I sincerely hope that Melissa Rivers gets it together with the creative team at E! and comes up with a Fashion style show that is tasteful and that Joan Rivers would make Joan Rivers proud.