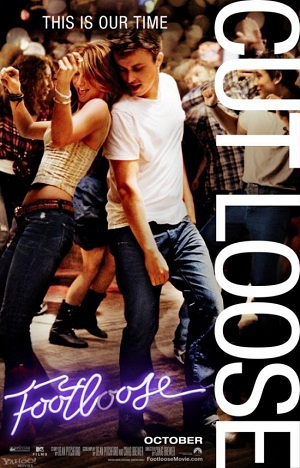 Today I saw the 2011 remake of the 1984 Footloose, one of my all time favorites.  I must say that I was surprised at how much I enjoyed it.  The message, “This is our time”  worked throughout the movie.

Although, the reviews for the movie were not good, I encourage you not to trust the reviews. Watch the movie for yourself.

What made the movie so enjoyable was the dancing and the music.  The dancers were exciting and energetic. It really put me in the mood to go country line dancing because of one scene that was so moving that I wanted to get out of my seat and dance.

The movie also had a well written modern storyline.  I was impressed that they were able to build upon the original storyline and tackle some tough issues, like domestic violence and self esteem and being different.

The actors embraced their characters and really made you feel their pains and joys.  One star that surprised me was Julianne Hough. She really has potential as an actor, in addition to being a great dancer.  She is a dead ringer for a young Jennifer Aniston.

Truth be told the entire cast of stars, Kenny Wormald, Julianne Hough, Dennis Quaid, Miles Teller, Andie McDowell and all the others were superb.

I am so happy that Chace Crawford and Zac Efron bailed from the lead role.  Although they are talented actors, they were not right for the role, because of their prior lead roles.  I do not think that I would have seen the movie if either of these guys would have played the role.

New comer, Kenny Wormald, really shined in the lead role, just as Kevin Bacon did in the original.  He managed to own the role and make you fall in love with his “Boston” bad boy attitude. His dancing was spectacular. I look forward to seeing this young man, in many more films.

One place where the movie fell short was the underage drinking.  I think that they could have addressed this better with the students realizing that underage drinking has consequences, especially for athletes, dancers and those interested in taking care of the body.

I understand that it was just a movie, but a movie that shows underage age drinking openly, without addressing consequences or using this as a teaching moment, falls short, since it is appealing blatantly to an underage demographic.  I am sure that the directors, producers and stars will all beg to differ. It is is my opinion, and in America, we all ere entitled to free speech.

The movie was a feel good movie. I encourage you to talk openly with young people that saw the movie.  The opening scene of 5 teens getting killed in a car accident is not enough to address the subject of drinking and driving for teens.  Be open and honest with the teens in your life.  Discussing tough subjects at home, prepares teens when they are faced with challenges from their peers.

That’s all for now… I encourage you to check out Footloose when it comes out on video.  Let me know if you enjoy the movie.

p.s.  “This is our time” can apply to anyone at any age.  That is why the movie will play well overtime and become a classic on its own merits, as the 1984 version became a classic.