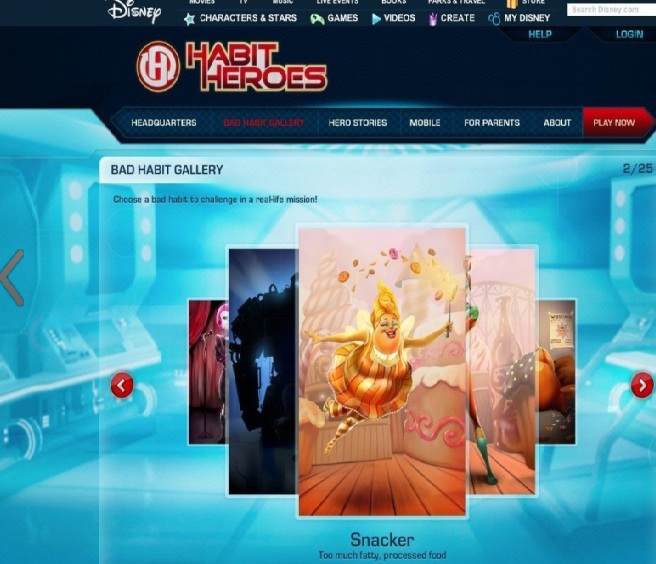 Wow!!! When did helping kids battle obesity become so controversial? We have a powerhouse like Disney trying to use their influence and help kids understand the importance of exercise instead of eating junk food and watching tv or playing video games for hours and everyone gets outraged.  Critics of the Disney anti obesity exhibit claim that Habit Heroes reinforces stereotypes that obese kids are lazy, have poor eating habits.

When will these controversial critics WAKE UP and realize that Obesity is an epidemic. Having health issues that can be brought as a result of being overweight can include things such as diabetes, cardiovascular disease, hypertension or certain types of cancer. Maintaining a healthy balanced lifestyle that includes proper nutrition and exercise should be the focus for everyone, especially our children.

After seeing the slideshow of the Disney anti-obesity Habit Heroes Avatars in a Huffington Post article, I do not understand the outrage.  Some of the Habit Heroes names include: Lead Bottom, Sweet Tooth, The Snacker, Control Freak, The Glutton, Insecura, and Drama Queen.

I do not Buy it, that these groups orpeople that are outraged  are sincerely concerned about the kids well being. Obesity and being over weight is not an issue to be taken lightly and should be taken seriously. Nevertheless,  Think about who stands to LOSE if Kids get smart and start avoiding junk food because it is for the body? Who stands to lose if kids turn away from eating snacks that have no value on the balanced diet chart?

Who gains if this new UNHEALTHY trend that It is okay to be fat wins in the battle against obesity? The list would be endless.

The one group that stands to lose if the message of childhood obesity is not addressed and taken seriously: Our Future Generation – The Children.

As a person that battles with weight issues, I know first hand how hard it is to fight being overweight.  It is not easy, especially as one gets older.  After learning that it is a lifestyle change instead of a quick fix, I found the secret to weight loss. What I eat, how much I eat and exercise all play a large part in my weight.

There are some people that take medications that bring on weight gain, I understand this, but most of the Obese and overweight population can push away from the table, stop eating unhealthy snacks and exercise more.

Disney, I hope that when you retool this obesity exhibit, you come back with a compelling one that fosters the discusssion on the impportance of the fight against obesity. Don’t sugar coat it, to appeal to the people that have their own agenda on keeping kids addicted to unhealthy food choices. Take a stand and keep this issue front and center. Obesity is not fun and often times can be avoided with better lifestyle choices.

I applaud groups that fight against discrimination, bullying, intimidation, harassment, on issues like gender, Height, Weight and Race. I know first hand how difficult it is being different. I was the tallest person in class growing up and was singled out for being different.  That is why a strong self image and positive self esteem is so critical for everyone of all ages.

If we can make eating healthy and exercise fun and exciting as well as educational, to help prevent obesity,  we should do so by all means. The message should be positive and not alienate kids that overweight or obese.

Childhood Obesity facts from the Center for Disease Control (CDC)

Click on the following to read more on the Childhood Obesity Issue:

Is Overweight the New Normal for  Kids? – Well Spring Camps

A parent’s guide to growing a healthy child – BCBS – Florida

What are overweight and obesity? – National Heart Blood and Lung Institute